My Drumcondra welcomes all business owners from Drumcondra and elsewhere to the monthly meetings in the Skylon Hotel Drumcondra. We meet at 7.45am and finish at 9.00am the 2nd Thursday of each month from September through to June. We welcome new members all the time and encourage existing members to bring a guest along. Meetings consist of networking opportunities, guest speakers and the opportunity for everyone to introduce their business. We recommend that you bring business cards to meetings. 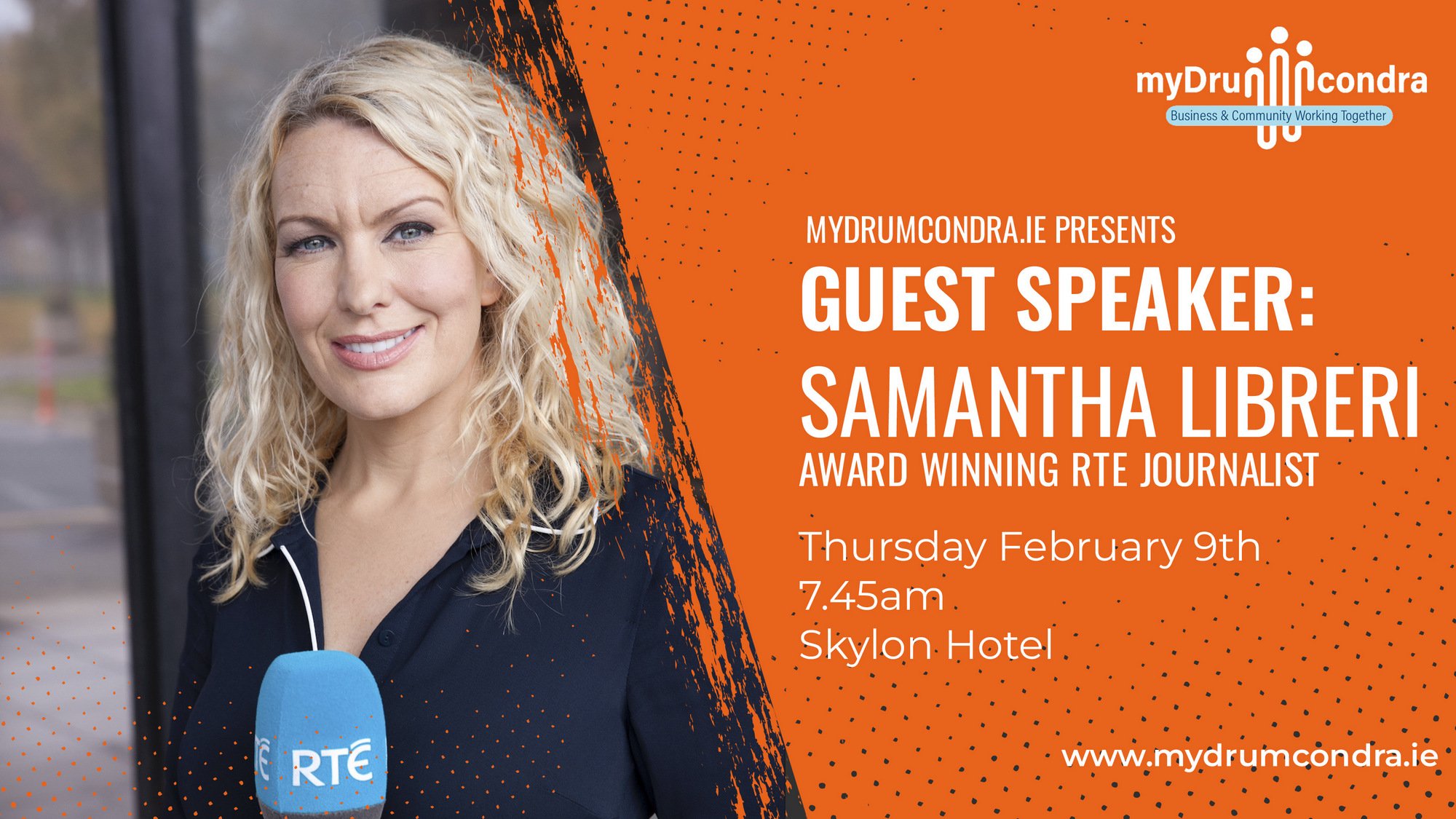 A reporter with RTÉs main TV news bulletins, she has covered hundreds of stories nationally and internationally including the Covid 19 pandemic, the 2018 abortion referendum campaign, the months of turmoil in the FAI following revelations about it CEOs expenses, the visits of Barack Obama and Queen Elizabeth to Ireland, the Berkley balcony collapse and more recently the tragic explosion in Creeslough in Co Donegal.

Samantha also presents some of RTÉ Radio 1s flagship news programmes including Morning Ireland, Drivetime, This Week and the News at One. She was assigned to cover the campaigns of Sinn Fein leaders Gerry Adams and Mary Lou Mc Donald in the 2016 and 2020 General Elections and has reported on Presidential, Local and European, Northern Assembly election campaigns and numerous Referenda. She has reported from the US, UK, Europe and Africa providing content for RTEs TV, radio and online platforms.Samantha has also covered numerous stories about transport including an award winning year long series on road safety with Charlie Bird.

Samantha grew up in Finglas and north Dublin and wrote a book about the area in 2012 called Finglas: A People’s Portrait
A graduate of UCD, where she edited the college newspaper, she is now a resident of Clontarf in Dublin and is married with two children. Her passions are running, reading, travelling and Shamrock Rovers Football Club.

You can find out more about which cookies we are using or switch them off in settings.

This website uses cookies so that we can provide you with the best user experience possible. Cookie information is stored in your browser and performs functions such as recognising you when you return to our website and helping our team to understand which sections of the website you find most interesting and useful.

Strictly Necessary Cookie should be enabled at all times so that we can save your preferences for cookie settings.

If you disable this cookie, we will not be able to save your preferences. This means that every time you visit this website you will need to enable or disable cookies again.